April Fool’s Day fake food makes it fun to fool your friends and family with these sweet treats.  That’s right, all of these are desserts… 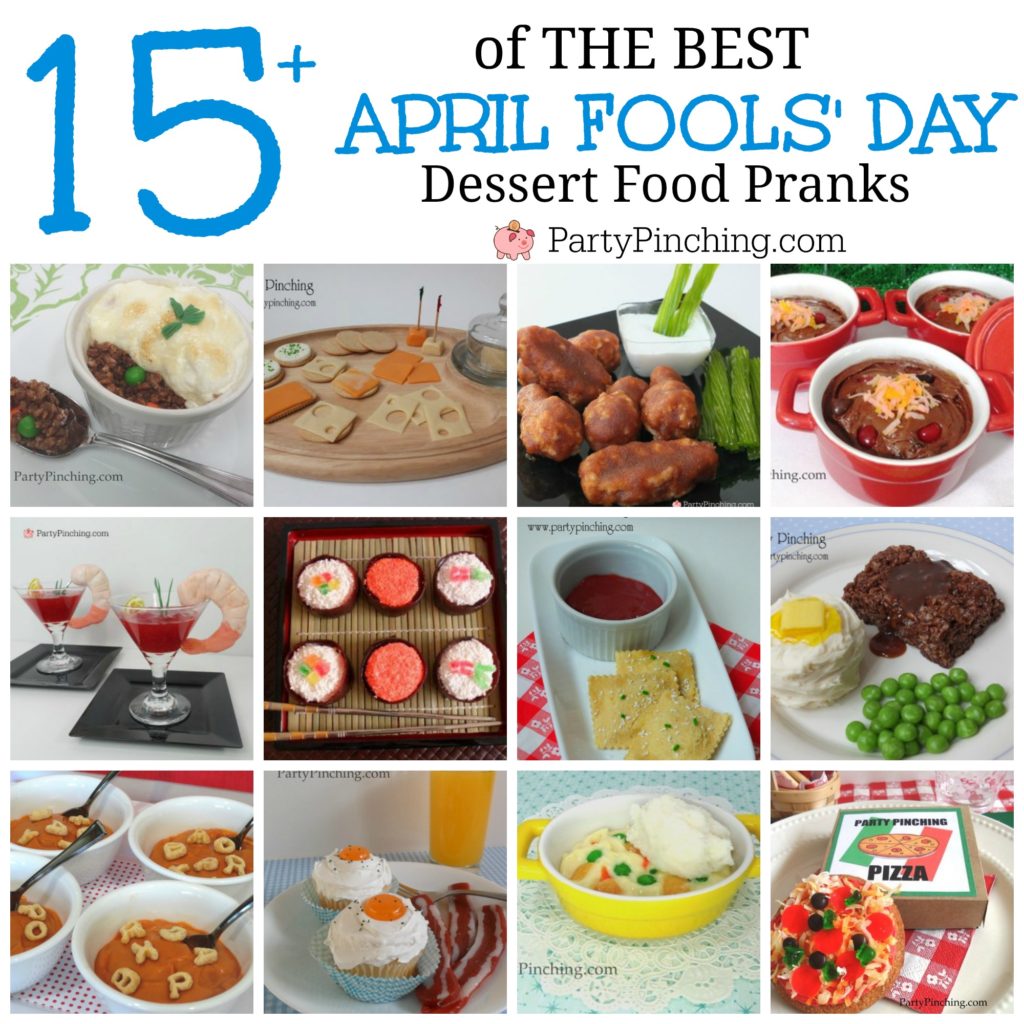 My son HATES meatloaf, so this is the perfect dessert to serve him on April Fools’ Day!  The meatloaf is made from Rice Krispie Treats!  You can make your own treats using Cocoa Krispies, but I used the new store bought Double Chocolately Chunk Rice Krispie Treat bars (I found these at Target but you can get them at Walmart or Safeway too.  I just pushed 2 bars together side by side (I removed some of the chocolate chunks) and then mixed some hot fudge and caramel sauce together to make “gravy” and poured that over the top of the treats.

For the mashed potatoes, I cut a cupcake in half and frosted it with vanilla frosting.  I topped it off with yellow gel icing and a yellow Starburst candy.

The peas are from the peas and carrots Jelly Belly candy pack. Peanut Butter and Jelly never looked so… Italian?  I just took 2 slices of potato bread (you can use any kind of bread, but potato bread has that yellow tint to it like ravioli) and put a little dollup of peanut butter in middle.  Then press the bread together around the peanut butter and cut around it in a square with a pastry cutter or pizza cutter.I grated a little white chocolate on top and added green sprinkles.  Strawberry jam is the “marinara” sauce. Say CHEESE!  You’ll have everyone smiling when they find out this is actually a dessert.  The cheese is made from Fruit Flavored Tootsie Rollsand the crackers are made from Golden Oreos!  Click here for a full tutorial on how to make these! Shrimp Mocktail – made of Kellogg’s Rice Krispie Treats and wrapped in fondant.  I used strawberry perserves as mocktail sauce and added a little slice of candy lemon and fondant chives for garnish! Shepherd’s pie?  YOU LIE!! This April Fool’s Day fake food will fool anyone. That’s right I created these out of Cocoa Krispie Treats mixed with “carrot and peas” made out of taffy.  Melt some marshmallows in a little butter, spread on top and broil for a few seconds.  My hubby was totally fooled by this one! 🙂 Stump your friends with a dessert version of Chicken & Dumplings.  Vanilla pudding, taffy made to look like peas and carrots, and diced angel food cake.  The “dumpling” is angel food cake too! These faux buffalo wings are made entirely out of Kellogg’s Rice Krispie Treats. To get my easy recipe click here. Chili?  Not really.  Chocolate cake baked in little chili bowls frosted and topped with jelly beans and orange tinted coconut.  For an even easier version, try chocolate pudding instead of the cake! I made this cake with my son 10 years ago when he was in Cub Scouts – it’s a kitty litter cake.  Made with a 9×13 cake, crushed vanilla filled cookies and tootsie rolls.  For the recipe, click here. For something a little less – um gross, here is the perfect April Fools’ Day breakfast.  Just simply mix Cocoa Puffs cereal with the new Scooby Doo Cereal and put it in a new dog bowl. No, it’s not alphabet soup, it’s pudding!  I just tinted butterscotch pudding (my son’s fav) with a little orange food coloring, added some Alphabits cereal, and you have a sweet Alphabet “soup”! Hamburger sliders made from Golden Oreo Cakesters buns with a Keebler Grasshopper cookie patties! Add some red and yellow frosting for ketchup and mustard, tinted green coconut for lettuce and sprinkle with sesame seeds.

Your family and friends will love these treats!  No foolin’!